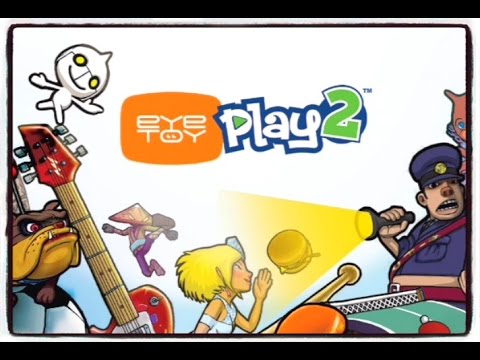 Another rare gem I still have to this day! 😉

Hey everyone & welcome to my lets play of the classic “EyeToy: Play 2” on the PS2.

EyeToy: Play 2 contains 87 games. There are 12 games and 75 bonus games. Some games are, “Goal Attack”, a soccer game where the object is to defend your team’s goal while the opposing team attempts to hit the soccer ball into your team’s goal. You have to move constantly, defending your goal by moving different directions while the EyeToy captures your movements and moves you accordingly. Another game is called “Table Tennis”. The object of this game is to play Table Tennis against CPU controlled opponents while hitting the ball with your hand. As you beat your opponents, the opponents change and are slightly harder to defeat. Your first opponent is named “Suzi Swift”. If you defeat her, you must face “Max Armstrong”. And if you defeat him, you must face “Dragon Pants Jim”. And if you defeat him, you face your next and last opponent, “Master Pong”. This game mainly focuses around minigames There is also an EyeToy: AntiGrav demo included with EyeToy: Play 2.

About the game:
EyeToy: Play 2 is the second PlayStation 2 game in the EyeToy: Play series. It uses EyeToy camera technology to project the player on to the television screen, allowing them to interact with on screen objects. The game contains twelve new minigames, that allow for single or multi-player modes. The game also introduces a tournament mode, that allows several players to compete in a series of minigames, earning points for each game won.

Play 2 also takes advantage of some EyeToy capabilities that the original did not, including being able to detect the speed and force of motion, and increased accuracy. This allows for more depth in games like Baseball, where points can be awarded for more forceful hitting of the ball. In addition, EyeToy: Play 2 features SpyToy, enabling players to turn their EyeToy camera into a security system that will record anyone that passes by. It is possible to capture photos or record video, and record a message that will play on the television screen should anyone come within range. EyeToy: Play 2 also contains a demo of EyeToy: AntiGrav in which one races on a hover board.