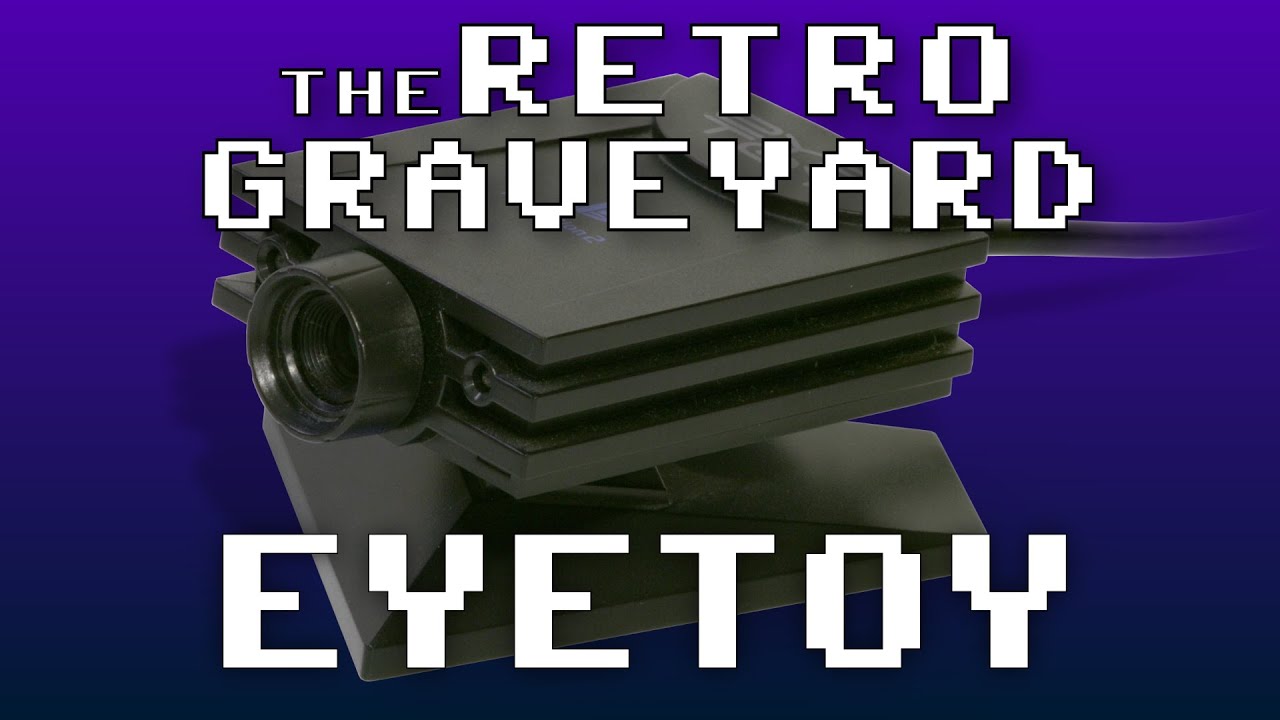 Mitch takes a look at the EyeToy for the Playststaion 2!

Welcome to the Retro Graveyard, the show where each week we take a different piece of old discontinued video game hardware back from the grave to give it a retrospective. This time, we’re looking at the EyeToy.

This is the EyeToy. I absolutely loved this thing when it came out over a decade ago in 2003. It’s essentially a webcam for the PS2, originally manufactured by Logitech, but manufacturing later switched to a company called Namtai.

The camera itself is in a case styled just like the Original PS2, and its mounted on a Pivot, so you can easily tilt it. It also has a blue power indicator, and another RED LED that lets you know when its too dark for the camera to work properly. It takes video at 30fps at a resolution of 320×240. There’s also a built in microphone. Pretty standard for a Logitech webcam in 2003.

The idea was originally came up with by a guy named Richard Marks, who got the idea the first time he saw the Playstation 2 on display at the 1999 Game Developers Conference. He joined the R&D team over at Sony Entertainment of America to work on the project, which was later moved to the London studio. They had a working demo by 2002, and the EyeToy was released to the public just a year later.

For the first time in this shows history, I’m talking about a piece of hardware that doesn’t really have much to be said about it at all, theres not a whole lot unique about it. It’s literally just a Logitech webcam. The magic is all in the software.

For this retrospective, I went and got my hands on 4 games from the Eye Toy line. I had to sift through a whole crap load of old PS2 games at a pawn shop, but I eventually found some.

It originally came packaged with a game called EyeToy: Play. A collection of 13 mini games.

In total worldwide, 26 games were released that required the EyeToy to play, and there were a whole lot more that were enhanced by EyeToy. An example of which is in Tony Hawk’s Underground 2, where you can use the camera to add your face to your player made character and oh my god that’s horrifying.

So here’s a little known fact. The EyeToy wasn’t just compatible with the Playstation 2. People made drivers for Windows, as well as Mac OSX and Linux so you could use your EyeToy as a standard PC webcam. You can even use it with the PS3! Yes, although the PS3 does have a successor to the EyeToy in the Playstation Eye, you can still use the EyeToy for video chatting. You can also use it to make stickers in LittleBigPlanet.

So, the Sony EyeToy wasn’t the first video game camera. But it was the first successful attempt at motion gaming. And it definitely wasn’t the last of either of those things.

As for competitors, it took until the next generation for Microsoft to come around with the launch of the Xbox Live Vision Camera on the 360. Which was then succeeded by the Kinect, and now the Kinect 2.

All of those accessories were made with the purpose of playing video games with your body as the controller, and it all started with this little guy.

Thanks for watching this episode everyone. And a very special thanks to TJ Thomas for sending me this EyeToy to use! I lost mine a while ago, and I really appreciate it. If anyone else has a cool thing for me to do a video on, I’m, of course, always open to that.

Anyway, thats it for this Retro Graveyard. See ya in the next one.