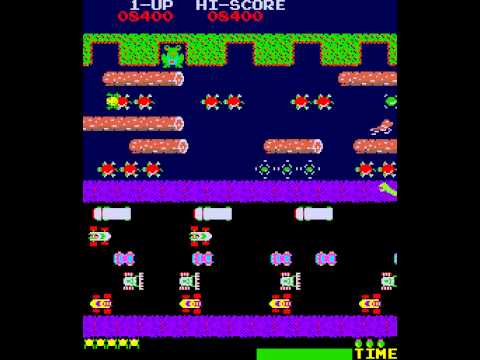 A maze game where you must move your frog to home as it’s final destination. The first half of the screen is bi-directional flow of traffic including buses, cars and race cars. Players must avoid these vehicles. Frogs can move safely with the flow of traffic to make their way to the second half of the screen, which consists of a river with fast moving logs and sinkable turtles. Frogs must hop on the backs of the logs and the sinkable turtles to get to the home base at the top of the screen. At random times throughout the game play, a lady frog will appear on a log. Bonus points are scored if the frog successfully hops on the back of the lady frog and escorts her safely home. A fly will also appear randomly in a home base. Bonus points can be scored if the frog hops in the home base when the fly is present. Sinking turtles also swiftly move across the river with the logs. If a frog is unsuccessful in hopping on a turtle’s back, the frog will sink and drown. Crocodiles, snakes, and otters also roam the moving river waiting to eat frogs on their way up to the home base. Players can hop on their back (except the snake, whose touch is deadly), but they must avoid their open mouths. The frog must be lined up perfectly to enter one of the 5 home bases. Players must maneuver the frogs to their home base within the allotted time (60 beats on the timer).

The frog can move vertically or horizontally by maneuvering the joystick. Players must maneuver the frog swiftly and precisely without getting run over, drowned, or eaten by the creatures that roam the flowing river. Avoiding traffic, deadly snakes, otters, crocodiles, and the treacherous diving turtles make game action stimulating in Frogger.

Other versions of this game are known as Frog.